The name Bibarrambla mean "Gate of the River" since the square originally stood on the sandy river bank. In Moorish times, festivals and jousts were held here, and later in Christian times bullfights. Unlike the bullfights of today, these were extremely violent and during one which took place in August 1609, 20 bulls killed 36 people and injured another 60.

Following the Christian conquest, however, the autos-da-fé were held here to decide the fate of many citizens. Many important Arabic manuscripts, documents and books, (particularly Korans) were also burnt, as they were in other public squares all over Granda, and it is thought that as many as 1,000,000 were destroyed in this way.

Over time, many changes have been made. Arched buildings were built on one of the sides where the city scribes worked, and customs houses were set up to control the spices and textiles being brought in. This was also where horse fairs were held.

As you enter the square from Zacatín, in the 16th century the streets on the left didn't use to exist in the 16th century, and this was where the fish and meat markets were located. Later the square was used for a vegetable market but this was abolished in 1837 and a fountain and a platform erected in the middle, constructed from materials from nearby convents which had been demolished. The meat and fish markets were relocated in 1880. The fountain was replaced by the statue of Fray Luis de Granada which is now in the Santo Domingo square. 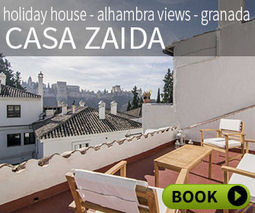